We are not yet able to decode the full genomes for thousands of varieties of wheat. However, genotyping chips can provide a “genetic identity card” for these varieties, a precious tool which researchers can use to inform their plant breeding work. These researchers are attempting, within the confines of their field, to respond to the climate emergency by breeding new varieties. 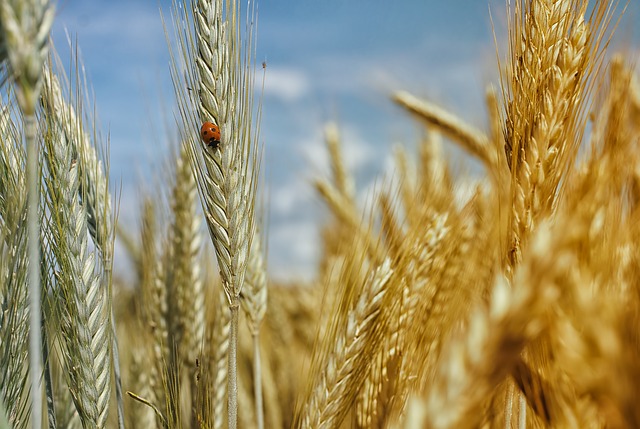 The varieties of wheat grown in twenty years’ time will not be the same as those currently harvested in fields. Extreme weather events have become so frequent that researchers are having to breed more resistant and resilient varieties of wheat so that the crop remains profitable for farmers. In 2016, French wheat growers were bitterly disappointed come harvest. After several weeks of rain, a large part of their crop was downgraded because it had sprouted before the harvest.

In the future, it may be possible to avoid this kind of financial disaster. Researchers at the INRA (the French National Institute of Agricultural Research) have identified one of the wheat genome regions involved in controlling this trait. This knowledge paves the way for genetic tests to classify different varieties depending on their resistance or susceptibility to sprouting. In this way, plant breeders will be able to identify the right hybridisations to introduce the desired alleles into new varieties of wheat, which will be resistant to sprouting. These are the varieties which will be grown within ten years.

A chip to produce an “identity card” for varieties of wheat

Tools such as chips have been developed off the back of work to decode the wheat genome (16 billion base pairs), which led to a draft sequence in 2014 and a high-quality reference sequence in 2018.

Scientists working on BreedWheat (an Investissements d’Avenir funded project) have developed a genotyping chip which can check 423,000 known positions in the genome (molecular markers) to produce an “identity card” for specific varieties of wheat.

Almost 9,000 varieties of wheat from around the world have been profiled to date. From now on, these new tools can be used in targeted breeding programmes to create varieties of wheat adapted to specific soil and climate conditions.

For researchers, genotyping chips primarily provide information about the genetic traits of an individual. But that is not enough.

Researchers want to be able to predict the agricultural value of a variety based on its genetic information. This is one of the objectives of the BreedWheat project, which aims to compare phenotypic and genetic traits so as to isolate regions of the genome involved in controlling traits relevant to agriculture such as yield, resistance to fusarium or tolerance of drought conditions. Identifying favourable allelic forms should make it possible to integrate them into the genome of new varieties through cross-breeding.

“These chips are therefore decision-making tools which, used in combination with conventional plant-breeding techniques, will shorten cycles and accelerate the development of higher-performance and better-adapted varieties.

Saving time in this way is crucial within the context of climate change and the transition to agro-ecological practices”, explains Etienne Paux, Director of Research at INREA Auvergne-Rhône-Alpes.

Tracing the evolution of varieties over 10,000 years

The genotyping chips may also open up new fields of knowledge, such as the varietal evolution of wheat grown for 12,000 years. As they migrated, the first Mesopotamians brought with them samples of the cereals they grew. They then bred them on the lands they had conquered, only retaining the best-adapted plants. In this way, wheat varieties in the United States bear witness to the different waves of immigration observed since settlers arrived on the American continent. In the great plains, the varieties grown have a close connection to those produced in northern and central Europe, all the way to Russia. The Americans who populate these regions are mostly descendants of settlers from these countries.

Finally, defining the traits of recent varieties sheds new light on the effects of plant breeding. “For a long time, it was believed that plant breeding had led to an erosion of genetic variety in wheat. Our studies show that, if this erosion has indeed occurred, it has been offset by the introduction, via cross-breeding, of genes from related species such as couch grass, thus providing a new form of diversity and new useful traits, in particular resistance to diseases and parasites.”