There is no better place to get a sense of the bustling life of West African towns and cities than their major food markets. Nobody who has shopped in one of these markets can forget their dynamism as places of commerce, with stands loaded with all sorts of food products. Markets in the region, which are not only supplied by vehicles but also by countless people on foot (especially women), are the economic epicentres of towns and cities.

The food economy is intimately connected to urban growth which, in West Africa, in happening at breakneck pace. Supplying towns and cities with food remains one of the main functions of the regional economy, generating considerable value. Almost 50% of West African household budgets continues to be allocated to food. In urban areas alone, the food economy employs 32 million people and represents 143 billion dollars or 22% of regional GDP.

But urbanisation has not just stimulated the food production systems which feed towns and cities. It is also radically transforming the way in which they are structured. What is the nature of these transformations? And how should they be taken into account in public policy and governance?

When urbanisation brings countryside and towns closer together 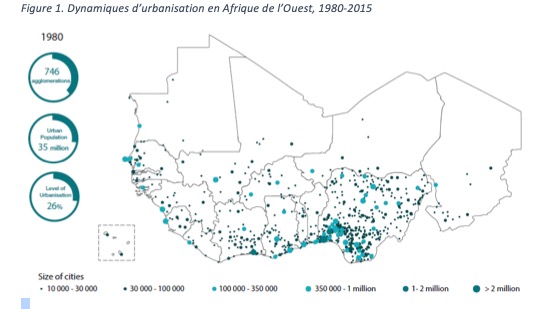 To understand how urbanisation is modifying the food production sector in West Africa, we must first observe the specific form it takes in this part of the world. It should be noted that urbanisation is not exclusively driven by rural exodus. Rather, it is caused by a gradual densification of the population which ends up turning certain rural areas into urban ones. Little towns are popping up everywhere: the number of conglomerations in West Africa grew from 746 to 2,402 between 1980 and 2015 (Figure 1). 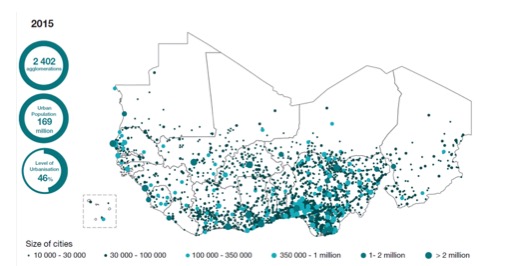 The urban fabric has not stopped densifying. In Benin, between 2000 and 2015, the average distance between two conglomerations dropped from 25 to 14 km. In Niger, it dropped from 57 to 38 km over the same period. One of the most striking effects of this type of urbanisation is that towns are becoming closer to the countryside, and the links between urban and rural environments have intensified.

Chains of value and farms reconfigured by consumers

Urbanisation and the intensification of urban-rural links have directly led to the modification of both demand and supply for food. On the demand side, change is not due to differences in food preferences between urban and rural consumers – these are very similar, as several studies have shown (see here, here and here) – but rather growth in income and changes in lifestyle connected to urban environments. Urban consumers are, on average, wealthier and therefore purchase more products which are more expensive (such as meat and fish). They consume a smaller proportion of carbohydrates, care more about quality, and eat out more (including fast food and street food). The spatial concentration of consumers in towns and cities has made it necessary to develop transport, storage and distribution infrastructure for food. Food delivery is one of the main reasons for congestion in towns and cities in developing countries.

The supply side is evolving too, because of the commercial opportunities offered by urban markets and generally high prices, which are also driving growing investment in the agri-food sector. New towns are appearing in rural zones which are already more densely populated and therefore often have better agricultural potential. This potential stands to be unleashed by the proximity of urban markets. Transport, storage and distribution activities are particularly dynamic in rural zones close to growing cities. Market gardening has seen considerable growth. In Senegal, the production of fruit and vegetables grew by 140% between 2000 and 2018. The coastal region of Niayes, which supplies Dakar with fresh produce, is responsible for the majority of this production.

Attracted by expectations of profits, a new category of agricultural investors is emerging. They are investing in land, irrigation, seeds, fertilisers and digital technologies. Their activity is leading to the intensification of farming and higher yields. This phenomenon goes hand-in-hand with growth in land markets and, in certain countries, an increase in the average size of farms. In Ghana, the share of farmland occupied by farms greater than 5 Ha in size went from 39 to 56% between 1992 and 2013. 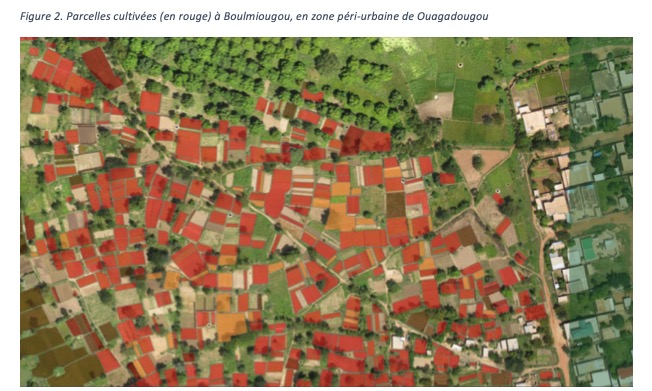 Governance of territories: the geographic footprint of food production systems

The transformations in food production driven by urbanisation are having a geographic impact. Rural zones are increasingly focused on food production for towns and cities. As these rural zones develop, some of them are becoming urban. The line between rural and urban is becoming blurred.

These processes have important implications for public policies and governance. Challenges abound for food production systems: the need for health, nutritional and commercial standards, upgrading infrastructure, specific needs connected to the increase in the size of farms, sustainable management of resources and preservation of the environment, etc. 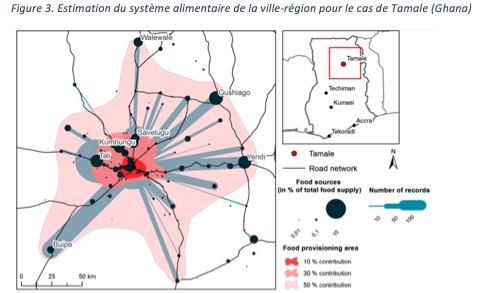 Meeting these challenges requires taking into account the intensification of urban-rural links, the fact that towns and countryside now exist in closer proximity to one another, and the blurring of the distinction between urban and rural. Public policies should be designed to apply to the most suitable territorial level. Standard administrative distinctions (district, town/city, region, country) fail to capture the new spatial reality of food production systems, which pay little heed to borders. Value chains are extending in length as towns and cities are growing. During the low season, in Tamale (Ghana), 40% of food consumed by the city has travelled more than 150 km before reaching consumers.

The concept of a “city-region”, whereby an urban centre and all of the peripheral territories connected to it by socio-economic links are seen as a single entity, may help decision-makers to find the right scale. Defining city-regions (Figure 3) in public institutions using mapping and spatial data management tools represents a concrete way of taking into account the effects of changes in population geography for the food production sector.