In Japan, 200 vertical farms produce thousands of tonnes of vegetables every year in towers around ten storeys high. Around the world, there are numerous plans to build market gardening towers, especially in China. Vertical agriculture is a technique that consists of growing vegetables in vertical stacks using hydroponics and aeroponics to supply water and nutrients to the plants. Although it is rapidly expanding, this 10-year-old technique is yet to prove financially profitable. 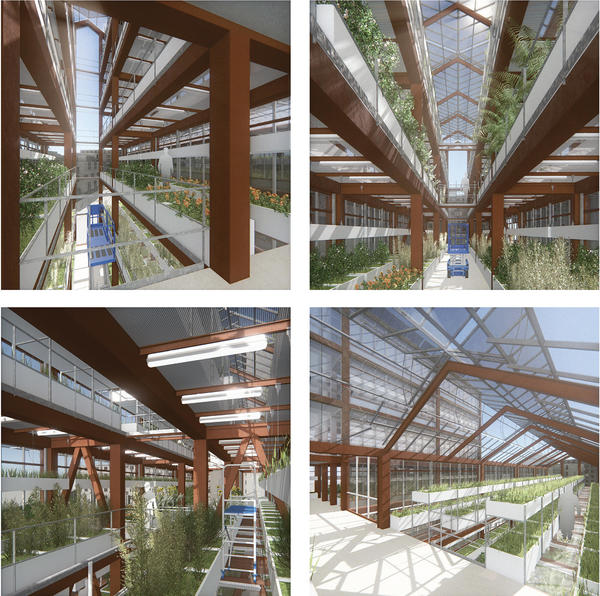 In the Greater Paris region, in Romainville, a vegetable farm will be created in a glass building. According to the town hall’s website (1), this third sector project will create jobs and produce fruit and vegetables while using sustainable agricultural practices.

In Asia, market gardening towers are a familiar sight in the economic landscape of the cities where they are built. In 2017, the authors of the Ministry of Agriculture study entitled “Les fermes maraîchères verticles” (Vertical market gardening farms) noted that 200 were active in Japan in 2017, “four hundred around the world and as many projects again under development, in the prototype phase or related to research and education“. China, which has around ten, is currently building 160 new market gardening towers.

Up to one hundred times more productive than conventional farming

The productivity figures are always spectacular. Millions of vegetable plants grow on all levels of these towers, designed like greenhouses and usually lit by LED bulbs. Expressed in terms of square metres of construction, the production of lettuces from a 10-storey tower is up to fifty times greater than for conventional market gardening. In conventional farming only two or three lettuce crops per square metre are possible.

These market gardening farms are packed with “cutting edge” technologies. Once tested, these technological innovations are applied to more conventional production systems in the ground.

A minimum of $280,000 is needed to start up and operate a small vertical farm using current technologies. But the cost of installing a second generation farm – computerised controls, automated planting, growing and harvesting – can exceed $15 million.

According to the study “Les fermes maraîchères verticales”, there are three types of business model. The most common model includes “farms with a Fordist approach” (…) “where engineers, foremen and operators work together”.

The second model, such as the Romainville tower, for example, consists of encouraging the emergence of community style production systems that are part of the circular economy. The use of resources in these farms is indeed limited: small ground level surface area and optimisation of the consumption of nutrients, water, light, power and so on. However, the production of the LED bulbs needed to light the greenhouses requires rare earths extracted from mines that operate with no consideration for the environment. For certain other agricultural experts, building these farms in urban areas limits the consumption of agricultural land and maintains the biodiversity of land that has not been artificialised in this way.

The replication of these standardised farms, the third model, could lead to the creation of franchised platforms almost anywhere. Big economic groups could then emerge.

Whatever happens, production from these multi-layer, indoor farms are unlikely to replace conventional open-air farming or even greenhouses. In Japan, the production of vertical farms only represented 0.6% of domestic production in 2014 (last available figure), according to the study “Les fermes maraîchères” (Market gardening farms).

Furthermore, only high added value crops make it possible to realise a profitable return on the capital invested. The  market represented sales of $2.3 billion in 2018 and investment sharply increased by $60 million in 2015 and 2016 to $414 million in 2017 and 2018.

For example, growing plants in market gardening towers may only be possible for part of their growth cycle. These plants could then perhaps be replanted in the ground to finish off their development.