Major Functions of Phosphorus in Plants

Indeed, P is rich in soils; but its phytoavailability to plants  is adversely affected by various   chemical and biological  processes. When applied to soil, P fertilizers are very rapidly  immobilized and transformed into insoluble P forms such as  calcium-phosphates in high pH  soils and aluminium- or iron-phosphates in low pH soils as shown  below  (Hinsinger, 2001   Plant and Soil. 237:173-195; Richardson et al., 2009, Crop Pasture Sci. 60: 124–143; Penn and Camberato, 201, Agriculture, 9, 120). Published reports indicate that only  less than 20 % of the applied fertilizer P is absorbed by the plants while the remaining is immobilized and unavailable for root uptake due to rapid conversion of fertilizer P to insoluble forms. 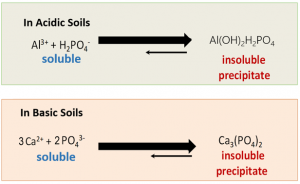 Microbial immobilization of P  is a further soil phenomena  which  makes fertilizer P unavailable  for  root uptake, at least, temporarily.  Soil microorganisms   compete with plant roots  for  available P and immobilize it in their  biomass (Richardson and Simpson, 2011, Plant Physiol. 156: 989-996). It is, therefore, not surprising why the phytoavailable  (soluble) concentration of inorganic phosphorus (Pi)  in soil solution is often too low (around 2 µM)  which is roughly  10 000 times   lower than the Pi concentrations existing in root cells  (Plaxton and Tran, 2011, Plant Physiol. 156: 1006–1015). It is interesting to note that  root cells  maintain  very high Pi  concentrations (at millimolar levels) while  soil solution  contain Pi at  low micromolar  levels. This suggests that plants develop  highly efficient root strategies  for P acquisition from soils (Hinsinger, 2001   Plant and Soil. 237:173-195; Lynch, 2011, Plant Physiol.  156:  1041–1049). This topic will be  discussed  in a separate article.

Figure 1 sows that  over 50 % of the agricultural soils are adversely affected from low amounts of phytoavailable P and exhibits   a high P retention/immobilization potential  (Kochian 2012, Nature, 488:466-467). Majority of P existing in soil  is tightly held or fixed  by the  soil particles and  not  useful for the root uptake. Depletion of phytoavailable P  through intensive cropping  and soil erosion is a further critical issue leading to soil P deficiency, in particular in low input farming systems (Tan et al., 2005, J. Sustain. Agric. 26:123-146; Alewell et al., 2020, Nature Comm. 11:4546). According to Alewell et al. (2020), P losses from soils through erosion may exceed 20 kg ha-1 yr-1). 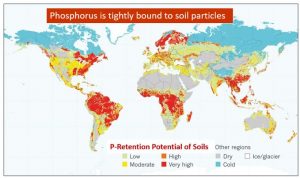 In soils having very high P fixation  capacity and low amounts of phytoavailable P, plant growth is  often  depressed  leading to  significant  impairments in  growth and yield capacity of  crop plants as shown below  in Figure 2 for rice grown  under field conditions in Tanzania and USA  and maize  in USA. The experimental   plants  respond  very positively to application of P fertilizers with better biomass production and  grain yield formation. The rice trials conducted by Dr J. Harrell in Louisiana showed increases in grain yield up to 50 %.

Figure 2: Growth of  rice plants in Louisiana in USA (top)  and  in Tanzania (below left) and maize plants in USA  (below right)  with low and adequate P fertilization (see https://www.ricefarming.com for rice  trials by Dr J. Harrell in Louisiana;  africarice.blogspot.com for rice experiment in Tanzania by Dr De Bauw and Plantsagronomy.k-state.edu for maize  experiments)

Functions of Phosphorus in Plants

Phosphorus has diverse physiological and biochemical function in plants.  There are several basic compounds in cellular systems which require P for their structure and biological functions including DNA, RNA, ATP, NADPH and phospholipids.

Phosphorus is required in energy transfer and storage through ATP (adenosine triphosphate) in biological systems  and  contributes to synthesis and stability of DNA and RNA. Similarly, as a basic component of membrane phospholipids, an adequate P nutrition is also essential for the structural and functional integrity of cell membranes (Hawkesford et al., 2012, In: Mineral nutrition of higher plants. Elsevier). Phospholipids are the major component of cell membranes, required  for structural stability and function and affect  the membrane transport  systems. Under P deficiency, structural impairments in cell membranes  can be expected with adverse effects on nutrient  transport across the root cell membranes NADPH serves as  a major provider of reducing equivalents in cellular systems and plays diverse critical roles including regeneration antioxidant defence systems . Below a few critical physiological functions of P in plants are introduced and discussed.

There are several reports dealing with the role of P in photosynthetic  carbon (C) metabolism and production of  photoassimilates. Majority of the reports indicate very critical functions of P  in photosynthesis process.  As a structural component of various sugar phosphates such as ribulose-1,5-bisphosphate (RuBP) and fructose 6-phosphate, P greatly affects photosynthetic CO2 fixation. Under low  P nutrition, impairment in  RuBP regeneration  is  a well-documented  result which diminishes  Rubisco activity and consequently CO2 fixation (Hammond and White, 2008, J Exp Bot 59: 93–109; Warren 2011, Tree Physiology 31, 727–739)   The regeneration of RuBP in chloroplasts is an ATP-dependent process, and, as discussed below,  the pool   of ATP is very low in P deficient plants.

Orthophosphate ions (i.e., inorganic phosphates; such as H2PO4–)  are important players  in photosynthetic  carbon metabolism and  used  as substrate for ATP synthesis  through the photophosphorylation process. As expected, P deficiency is often associated  with low concentration  of orthophosphate ions (Pi)  in  chloroplasts which results in impairment in  ATP production through  the reduced  ATP synthase activity (Figure 3; Carstensen et al.,2018, Plant Physiol 177:271–284).The adverse  impact of low P  on ATP formation is highly Pi specific and is rapidly restored  after application  of P to the low P-plants. It is obvious that an adequate P nutrition  is essential  for the  proper photosynthetic activity of plants.

Phosphorus has been found to be a key mineral nutrient responsible for an effective  biological N2 fixation in leguminous plants.  Under low P supply, nodulation and nodule  functioning are  impaired, and amount of N  fixed is reduced.. Nodules represent a  significant sink for P. It has been shown that  P concentration of nodules of various legume plants  is  3-fold higher compared to other parts of the plants (Schulze and  Drevon, 2005,  J. Exp. Bot. 56:1779–84; Qin et al., 2012, Plant Physiol. 159: 1634-1643; Lazai et al., 2017, Agron. J. 109:283–290). Qin et al (2012) showed that P deficiency significantly impairs nodulation in soybean plants and  causes marked decreases  nodule number and nodule size (Figure 4).When legume plants suffer from P deficiency, increasing amount of P is allocated in the nodules.

Figure 3: Changes in ATP formation and  activities of ATP synthase enzyme in chloroplasts of barley plants  grown under low and adequate P supply  and also in P-deficient plants after re-supply of P (For the details  see  Carstensen et al.,2018, Plant Physiol 177:271–284)

There is often a close relationship between nodule formation and nodule P concentration. High dependency of N2 fixation to  sufficient P nutrition is related to the fact that  that  N fixation process is   a highly energy-demanding  process and requires at least 16 moles ATP to reduce one mole N2.   Hence, the activity of nitrogenase enzyme is also positively influenced  by improving  P nutritional status of plants. In whole nodules of soybean plants,  the concentration of ATP and energy charge  are significantly reduced under low P supply   compared to the  P sufficient conditions (Sa and Israel, 1991; Plant Physiol.97: 928-935). These findings highlight importance of P in optimal nodule performance and N fixation process. 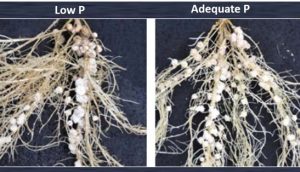 One of the main structural changes in response to low P availability in growth medium is the process of tiller development. Tillering and number of tillers are known to be  major plant factors affecting  yield capacity of  cereals. Under low P supply, severe reduction or suppression of  tillering  is very common, depressing biomass and yield formation (Figure 5;  Hammond and White, 2008, J Exp Bot 59: 93–109;). Similar to tillering, also  leaf  expansion is  highly  sensitive to P deficiency,  and impairment in leaf expansion as a response to  low P supply    has been  suggested to be the earliest change  in P-deficient  plants  (Radin and Eidenbock, 1984, Plant Physiol 75: 372–377; Lynch et al., 1991; Crop Sci.  31: 380-387). As expected, a decrease in leaf area will  diminish light interception and biomass production. Reduction in leaf expansion under low P supply has been ascribed to  reduced transport  of water  from growth medium in the leaves  and hence  low turgor pressure needed for the expansion. 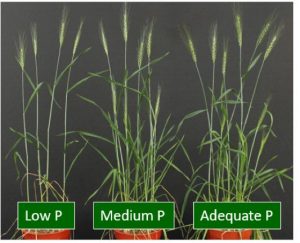 Figure 5: Wheat plants grown on a P-deficient soil with low, medium and adequate P fertilization (picture A. Yazici and I. Cakmak)

Phosphorus deficiency has also  a  clear negative  impacts on reproductive growth of plants. Delay in reproductive development and retardation in ripening are common problems  in plants under low P supply. However, according to Nord and Lynch (2008, Plant, Cell and Environ 31: 1432–1441), the well-known delay in flowering and maturity  under P deficiency might be a useful delay   for plants:  it can  allow  plants to have   longer time  for the utilization and re-mobilization of P exiting in the vegetative tissues.

Phosphorus deficiency symptoms commonly start on older leaves because of high phloem mobility of P within plants. Usually, visual P deficiency symptoms develop in leaves containing less than  0.2 percent  P on a dry weight basis. Development of dark and bluish green colour on leaves is typical symptom of P deficiency in plants (Figure 6).  When P deficiency is advanced, leaf chlorosis and leaf tip necrosis could be also visible. Under P deficient conditions, shoot growth is known to be more affected than the root growth, most probably, because P deficient plants allocate higher amounts  of photoassimilates in the roots for better root  formation  and adaptation. This issue will be discussed in an another article. 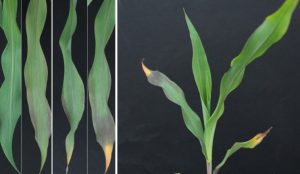 Figure 6: Young maize plants grown in a medium with low and adequate P application (picture A. Yazici and I. Cakmak)

Today, most of agricultural soils   have  P deficiency  problem  limiting crop productivity, while in some regions  P surpluses are common.  Soil   P deficiency problem is  further  aggravated through  soil P depletion  because of    continuous    cropping and  soil erosion. Monitoring and measuring P nutritional status of plants  by soil and plant  tissue analysis is an important agronomic  practice in reducing   P deficiency-related  impairments in plant growth. However, since soils tests are generally not useful,  leaf tissue analysis results  for P should be integrated with soil P tests.  It is suggested that analysis of plants for the P status should be realized rather  during early stage of  growth.  It is known that the level of P availability during the early stages of growth  is highly  critical and has a decisive effect on yield potential of crop plants (Grant et al., 2001, Can. J. Plant Sci. 81: 211–224).