In West Africa, at the end of the 1990s, the cotton sector (white gold), was confronted with a devastating pest which was destroying harvests – the whitefly. Faced with this scourge, the government of Burkina Faso, one of the largest African producers of cotton (which represents 65% of monetary income for rural households), authorised tests for Bt cotton farming, carried out in partnership by Monsanto and the Institute for the Environment and Agricultural Research (Inera). Two local varieties were therefore introgressed at the Inera using Monsanto’s Bt gene. The insect-resistant transgenic seeds were then made available to farmers in 2008. These locally-produced seeds were aimed at eliminating the cotton pest. In 2014, Burkina Faso counted the greatest number of transgenic cotton producers in Africa: over 140,000 smallholder farmers were then growing Bt cotton or 75% of them. Studies had shown that transgenic cotton would increase yields by 50% on average, despite the high cost of the seeds. The number of insecticide sprays could be reduced from six to two, significantly reducing the exposure of farmers to dangerous chemicals and saving them precious time.

However, five years after the operation was launched, it became clear the Bt cotton was not delivering on its initial promise. Inera-Monsanto varieties saw a drop in the quality of fibres, which is measured in length, leading to 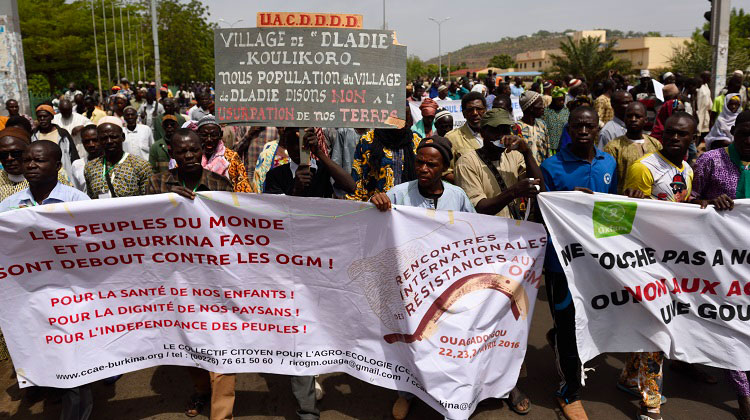 cotton from Burkina Faso being downgraded on the international market. Several explanations were suggested for the reduction in the length of fibres, without any one of them ever gaining traction over the others: poor understanding of necessary technical processes on the part of farmers, zones where cotton was not the main crop, exceptional increase in attacks from pests. Another factor was suggested by producers: the poor quality of Inera seeds and fertilisers distributed by cotton companies. The failure can therefore be attributed to a range of factors.

Finally, even if yields appeared to be better in the fields, the cotton harvested had fewer fibres. For farmers who enjoyed a guaranteed price from cotton companies, this drop in fibre quality was not a deterrent in the short term. But for the three companies which dominate the cotton sector in Burkina Faso — Sofitex, Société Cotonnière du Gourma (Socoma) and Faso Coton — the situation was catastrophic. In 2016, seven years after adopting Monsanto’s Bt cotton, they therefore decided to give up this variety of seed. In the space of a year, the Bt cotton variety therefore went from 70% to zero.

The fall in production which followed was terrible, with the worst results for twenty-two years. In 2018-2019, the harvest collapsed by 30% compared with the previous year. While producers were banking on a harvest of 800,000 tons of seed cotton, only 436,000 tons were produced, according to data from the Regional Program for Integrated Cotton Plant Protection in Africa (PR-PICA). Burkina Faso, which was the leading producer in Africa, dropped to fourth place, behind Benin, Mali and Côte d’Ivoire.

Reeling from the previous season’s revenue losses and heavily indebted, a number of farmers from the traditional cotton-growing regions in the West (Boucle du Mouhoun and Kénédougou regions), decided in 2019 to divest from cotton and diversify their production. The 2018 drought did not improve matters, and security issues in the East of the country drove other farmers to abandon their harvest. Over 200,000 hectares went unplanted.

The example of Burkina Faso demonstrates the complexity of debates surrounding the advantages of transgenic crops for low-income farmers. In this specific case, the technology seems to have achieved its targets: making crops resistant to pests, reducing the use of pesticides, increasing yield, making working conditions less arduous. Others contend that many farmers appreciated these services, even though some doubted its capacity to resist predators in the long term and complained about abnormal deaths of animals which had eaten cotton residue. But the unexplained negative impact on the length of Bt cotton fibres resulted in companies abandoning this biotech option.

FAO IN SEARCH OF PARTNERSHIPS